This isn't particularly novel but I'm writing this to raise defensive awareness that abusing code-signing certificates is not limited to well-resourced attackers.

Stuxnet was known for signing its malware with legitimate certificates stolen from two Taiwanese semiconductor companies (both of which happened to be headquartered in the same industrial park). Signing the malware certainly didn't make it any safer, but it helped systems establish trust. Some security products may overlook signed binaries as part of their heuristics, and Office products can be configured to allow signed macros.

This causes a substantial breach of trust because certificates are supposed to assure users and systems that the software was developed by the organization named in the certificate and that it hasn't been modified by anyone else.

There a few ways to obtain certificates while concealing one's identity:

Certificate extraction missions from internal corporate networks have been popularized, but are not necessary if an attacker is looking to just get any valid certificate they can use for a period of time. To that end, attackers can take advantage of the fact that valid certificates tend to be inadvertently committed to public repositories from time to time.

Using GitHub as an example, one way to find Authenticode certificates could involve:

Further optimizations and variations could be made. Using the API could automate this process to a degree, or at least make it easier to sift through a shortlist of candidate repos. That said, even with the growing scale of content to sift through, finding a valid certificate is still rare.

Using the technique above, I was able to find a certificate issued to a leading OEM company which was still valid at the time. It appeared to be on a user's personal account. I reported the issue to their security team and the offending repository was quickly removed. 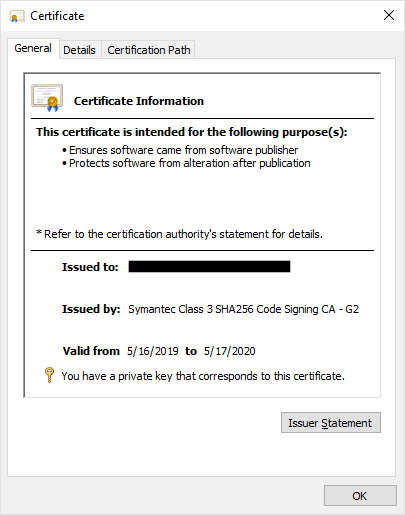 Although an attacker using this technique won't get their pick of the litter, finding at least one valid certificate should be enough for many use cases. The process is repeatable and the cost is low.

Thank you to @MastemaSec, @JT_InfoSec, Geoff H., and Lincoln for their reviews and feedback.

Hello! I'm Jackson, and this is a place for me to publish shareable thoughts.